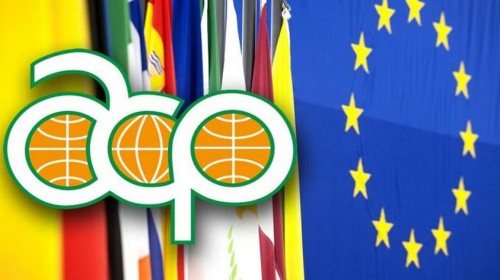 At the end of the 107th session of the Council of Ministers of the Africa-Caribbean-Pacific Group (ACP), held in Lomé on 29 and 30 May 2018, Togo has been assigned to chair the Central Negotiating Group of the ACP. This group is mandated to define the modalities and to conduct negotiations with the European Union (EU) on the future ACP-EU agreement to replace the Cotonou Agreement, which expires in 2020. At the moment when Togo finds itself in the heart of the EU ACP negotiations as during the time of the signing of the 4 Lome Conventions, the Togolese civil society, tuned with its counterparts in the ACP countries, wants to challenge the Togolese authorities on citizens’ expectations in relation to  this new ACP – EU cooperation agreement.

At the time of the review of the Cotonou Agreement, Togolese civil society draws lessons from the shortcomings noted in the implementation of said convention for almost 20 years. The hopes raised by the Cotonou Agreement, signed in the early 2000s for a more equitable partnership between the European Union and the ACP countries at the beginning of the new millennium, were quickly disenchanted. The lack of coherence between the policies deployed by the European Union countries and their commitments in relation to development aid in the context of the Millennium Development Goals (MDGs) has led to an exacerbation of inequalities within and between ACP countries. The text’s commitment to inclusive political dialogue, egalitarian partnership, respect for human rights, the rule of law and democracy, presented as the fundamental values ​​of the Cotonou Agreement, has not been able to change the relations of dependence between the ACP countries and their former colonizing powers.

Togolese civil society would like to highlight the difficult episodes of imposing the Economic Partnership Agreements (EPAs) on the 6 regions of the ACP group by weakening their integration and at the expense of the survival of their farmers, their breeders and their fishermen. In addition, the blackmailing of EU development aid to ACP countries for the signature of readmission agreements on « undocumented » migrants or more generally for agreements on the control of mobility and migration of citizens of the ACP countries to the European Union, has struck civil society in recent years. The negative economic and social impact of these agreements has been denounced by the civil society of the ACP countries and Europe via numerous citizen mobilizations without their voices being heard. The democratic illusion sold by the Cotonou Agreement has given way to the will of European states to defend their geopolitical interests and the profits of their transnational corporations.

As a result of the unbridled liberalism and unequal trading system promoted by the Cotonou Agreement, ACP countries have seen increasing poverty in rural and urban areas in recent years. The widespread misery that has ensued in ACP societies has led to many social demands, hunger riots, the outbreak of secessionist and even armed rebellion, the strengthening of authoritarian and repressive powers, corruption or the migration of many of their citizens. Despite the gloomy aspects of more than 40 years of ACP – EU cooperation with ineffective development aid policies; the unfulfilled commitments of the Lome Conventions and the Cotonou Agreement, Togolese civil society refuses all despair. It remains optimistic about the advent of a new framework for fair partnership between the ACP Group of States and the EU.

While recognizing the legitimate temptation of withdrawal of the ACP group formulated by some countries, the Togolese civil society urges a unitary approach of the ACP during negotiations to avoid the division maintained within the group in the name of the specificity of each regional group. Togolese civil society urges Togolese presidency of negotiating group to be the voice of ACP citizens in defence of their right to decent work and sustainable development of their society, food and natural resources sovereignty, their right to mobility and to settle in another country when their life is threatened. The Togolese civil society calls for the solidarity of European citizens, with their experiences of resistance against the Transatlantic Free Trade Agreement (TAFTA), the Transatlantic Trade and Investment Partnership (TTIP), the Comprehensive Economic and Trade Agreements (CETA), the anti-immigration and anti-refugees policies, to challenge the governments of their country and the European Commission for a partnership of fairness and justice between the ACP countries and the EU.